IN two passages in the writings of Mary Baker Eddy certain words stand out boldly and open up large possibilities for us as we ponder their meaning. In "Unity of Good" (p. 7) we read, "An acknowledgment of the perfection of the infinite Unseen confers a power nothing else can;" and in "Science and Health with Key to the Scriptures" (p. 427), "Immortal Mind, governing all, must be acknowledged as supreme in the physical realm, so-called, as well as in the spiritual."

The Bible also contains several important passages which hinge on this thought. Just before Christ Jesus called Lazarus from the tomb, he acknowledged the power of God in these words: "Father, I thank thee that thou hast heard me. And I knew that thou hearest me always." Then followed the raising of Lazarus, in that proof of deathless life which his understanding brought forth. 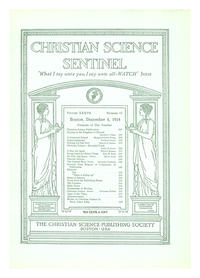