I send a few words to express our gratitude for the many...

I send a few words to express our gratitude for the many blessings received in Christian Science. About nine years ago, my husband had a severe attack of rheumatic trouble, and continued to suffer more or less from that time until two years ago. He was under the care of different physicians, but about a year ago he asked for help in Christian Science. A practitioner came to our home and began to treat him, and after receiving a few treatments he was healed. Then my little daughter had a severe attack of fever, which was overcome within twenty-four hours, and the serious ear trouble which came with it disappeared in a few days.

During the two years that we have been studying the Bible in connection with "Science and Health with Key to the Scriptures" by Mrs. Eddy, I also have been greatly helped, and for all the blessings which we have received we are truly thankful to God, and also to our dear Leader.

Send a comment to the editors
NEXT IN THIS ISSUE
Testimony of Healing
Although I did not come into Christian Science for its... 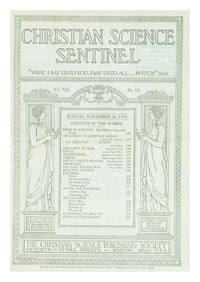