The modern banking system of Japan dates from the promulgation in 1872 of the national banking regulations, which were modeled on the national bank act of the United States. Ten years later the privilege of issuing notes was taken away from the national banks and given to the newly created Bank of Japan. By 1899 national banks had ceased to exist as such, their places having been taken by banks organized under special acts. There are 664 savings banks in the country, organized under regulations promulgated in 1893. These, as well as the ordinary banks, of which there are 1423, are under the control of the minister of finance. They are not very large individually, owing principally to the popularity of the postal savings bank operated by the imperial Government.

Huge silos for the storage of wheat will probably be erected in each of the four wheat states of the commonwealth of Australia, as a result of the recommendation of the new wheat storage commission appointed at the end of May. The two great problems which Australia has been facing have been, in the words of the prime minister: "First, the securing of additional freight by every possible means, putting existing freight to the very best use by the more expeditious loading, discharging, and dispatching of vessels; and, secondly, the provision for preserving in good order and condition such products as could not be marketed owing to want of freight." 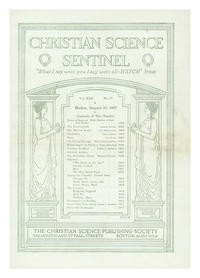