In "Miscellaneous Writings" (p. 118) Mrs. Eddy writes: "The warfare with one's self is grand." From the basis of material sense, to war with one's self seems a difficult task, and one quite uncertain as to its results. It is much like that of a man trying to pull himself up by his bootstraps. To the material senses man appears to have no eternal, abiding Principle of being, nor does there seem to be any definite science of life to guide him. He finds himself burdened, and at times overwhelmed, with sin, sorrow, and disease. They seem to be woven into the very fabric of his being, to be a part of himself, and his struggle to be free from these evils is carried on much "as one that beateth the air," as Paul says, and is generally disheartening. How, then, can the warfare with self be rendered grand in its operation and victorious in its results?

Mrs. Eddy counsels us to "labor to dissolve with the universal solvent of Love the adamant of error,—self-will, self-justification, and self-love." "Truth is an alterative in the entire system, and can make it 'every whit whole'" (Science and Health, pp. 242, 371). What is this Love, this Truth? In the fourth chapter of the first epistle of John we read, "God is love," and the psalmist asked, "Whither shall I flee from thy presence?" thus declaring the allness, the infinitude of God. Obviously that which is infinite must be Truth, and in Christian Science Truth and Love are regarded as synonyms of God. Reasoning from these premises, we may understand how it is that God is divine Principle, for that which is infinite must include all and be expressed through all. 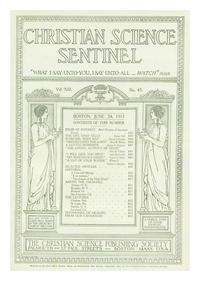