Having been wonderfully blessed through the ministrations...

Having been wonderfully blessed through the ministrations of Christian Science, I wish to acknowledge my gratitude. My mother had been helped, and she advised in a try it. I was at this time sick in bed, expecting in a few weeks to pass through what had previously been the tortures of childbirth, with only the thought of death before me, as on a previous occasion the attending physician had said I never could live to give birth to another child. I had been under medical treatment for nearly two years, with only temporary relief; but as soon as the Christian Scientist began to treat me my fear and suffering abated and I was filled with peace and hope. I was soon able to be up, and at the end of two weeks the birth took place with but slight pain, the conditions being every way normal. I was not weak and felt able to go about as usual.

Several other demonstrations have been made,—a severe headache healed in a few minutes, and my daughter was healed of eye trouble in one day. We are greately rejoiced to know that Truth heals and that all blessings are ours as soon as we are ready to receive them. Later, our baby was taken sick on a Sunday, and grew worse so fast during the night that we used material remedies, but the child continued to grow worse. It seemed to be acute lung trouble, and as soon as it was daylight my husband went for the practitioner who had helped me. About the time they returned the little one seemed very low, indeed the breathing had apparently stopped. The practitioner began to treat her, in the understanding prayer of Christian Science, and in a few minutes the child began to revive like a wilted flower when placed in water. The Scientist removed the medicated flannel, and though for some time we could not tell whether the little one was alive or not, she gradually improved. Her recovery was the means of leading us away from dependence on the material and unreal, to the spiritual and real. The Bible is now illumined by the Christian Science text-book, "Science and Health with Key to the Scriptures" by Mrs. Eddy; the Quarterly; Sentinel, and daily Monitor, and thus we have a continual feast of good things. Previously I could not understand the Bible and had sometimes questioned if there was any God, but with my new understanding the Bible has become very precious to me. For all of these great blessings and with a hopeful outlook for the future we are very grateful.—Mrs. F. A. Libby, Corinna, Me.

Send a comment to the editors
NEXT IN THIS ISSUE
Testimony of Healing
I wish to express my gratitude to God for what Christian Science... 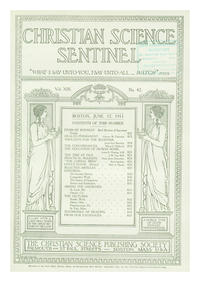