[Following is the text of the program of the above title released for broadcast the week end of March 16-18 in the radio series, "How Christian Science Heals," heard internationally over more than 800 stations. This is one of the weekly programs produced by the Christian Science Committee on Publication, 107 Falmouth Street, Boston 15, Massachusetts.]

On this program Mrs. Bessie Lee Miller of New York City told of her own experience. The program was as follows:

Speaker: Have you ever felt that you were at the end of the road, that there was no possible solution to some serious problem? Our guest was in a similar situation, but she gained victory, even when defeat seemed sure. She was healed at a time when she was virtually helpless. I'd like to introduce Mrs. Bessie Lee Miller of New York City. Just what sort of trouble did you have, Mrs. Miller? 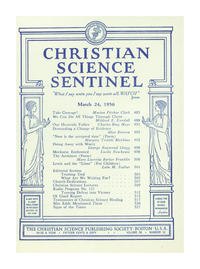