The conscientious student of Christian Science often inquires of himself how he is progressing spiritually. Christian Science has revealed to him the great truths of spiritual being—the allness of God, Spirit, and the altogether spiritual nature of the real man, God's image or idea. It has shown him the unreal nature of matter and of all that pertains thereto—sin, sickness, suffering, sorrow, and death. It has made known to him the way whereby he can overcome materiality through spiritual understanding and the spiritualization of his thought. And because of this, his effort is to attain to a greater and still greater measure of spirituality. Paul's words to the Galatians (5:25) appeal strongly to him, "If we live in the Spirit, let us also walk in the Spirit."

Where then does the Christian Scientist stand spiritually? Are there any tests he can apply to answer the question? There are many. First, he may inquire of himself how he is regarding evil, that which formerly appeared so real to him. Is he more clearly seeing evil's unreality through his knowledge of God's allness? Is evil becoming more apparent to him as a repulsive illusion, and proportionately more obnoxious to him? If so, he is progressing spiritually. Mrs. Eddy writes (Science and Health with Key to the Scriptures, p. 207), "Because God is Spirit, evil becomes more apparent and obnoxious proportionately as we advance spiritually, until it disappears from our lives." 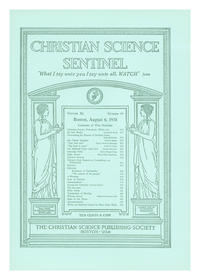