The Christian Science Hymnal contains a hymn, the first line of which asks the question, "What is thy birthright, man?" In the very last line of the hymn this important question would appear to be summed up briefly and positively in the words, "Dominion over all." What freedom and assurance, what power and authority, are contained in the words "dominion over all"! Indeed, to have dominion means to have supreme authority, the highest power to act or govern. It does not come through human striving or will-power, but is God-given; and it was his realization of the fact that enabled Jesus to speak "as one having authority." Throughout his earthly labors he proved man's dominion over everything that was not Godlike, over everything that claimed power and selfhood apart from God.

The Scriptures give numerous instances of wonderful deliverances from evil and danger, and many who have read them have been comforted and assured without understanding their full significance, or even attempting to explain them. Mary Baker Eddy was a deep student of the Bible, and she sought the reason for these so-called miracles. Through her study and devotion she found, and later proved, that the wonderful faith which freed from the fiery furnace the Hebrew youths, protected Daniel so that he had no thought of fear among the lions, and enabled Paul to shake off the poisonous viper and feel "no harm," was based upon the simple fact that God is the only power. So sure were they of this great truth, that they did not find it necessary to implore God's help. They claimed man's birthright as His child, and simply and trustingly accepted the goodness and love of the Father-Mother God.

Send a comment to the editors
NEXT IN THIS ISSUE
Article
Goodness, Truth, and Beauty 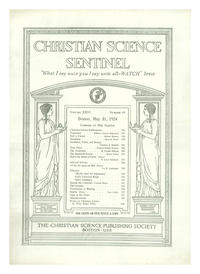