A traveling man who is a student of Christian Science, visited a certain city at almost regular intervals, and when in his room at the hotel seldom locked the door thereto except at night. On several occasions a person not agreeable to him would at times enter the room. On a recent trip to that city, just after entering the room assigned him in the hotel, these words of Mrs. Eddy came to him, "Stand porter at the door of thought" (Science and Health, p. 392); and he said to himself, "This means to lock the door against all that is not agreeable." So he locked the door to his room.

After a while the knob of the door was turned, and when the door failed to open the person outside knocked for entrance. He continued to knock, but receiving no invitation to come in, at length went away from the door. The traveling man remained at the hotel for several days, during which time he never locked the door of his room except at night, but the undesirable visitor never again came into the room or knocked at the door for entrance.

Send a comment to the editors
NEXT IN THIS ISSUE
Article
We would respectfully call the attention of our critic... 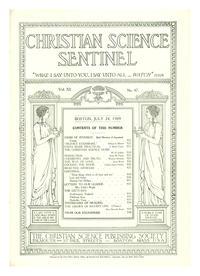