THE KNOWLEDGE OF GOD

We read in Science and Health that Jesus defined everlasting life as "a present knowledge of his Father and himself,—the knowledge of Love, Truth, and Life" (p. 410). It follows, then, that what man knows of God constitutes his being: his knowledge of God is his life; hence the individuality and consciousness of man consist of his knowledge of his creator. From this premise we conclude that if his consciousness includes anything which is unlike God, unlike Love, just to that extent he is not reflecting or expressing the true life.

"Josh Billings" is credited with saying, "What's the use of knowing a whole lot, if what you know isn't so?" No use! To fill our thought with that which is untrue is only to burden ourselves with false beliefs that must eventually be discarded—cast out. Sooner or later every individual must eliminate from his consciousness every thought that is unlike God, for these beliefs serve only to retard and hinder the development in his consciousness of the real man, the true image and likeness of God. Paul said: "Know ye not, that to whom ye yield yourselves servants to obey, his servants ye are to whom ye obey." We must stop admitting to ourselves the presence, power, and reality of so-called material conditions, and keep our minds filled with the truth about God and man. 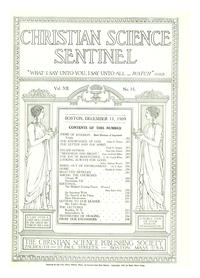