There is still a definite need for maintaining the fund in order to continue the highly valuable work of sending Christian Science literature to those in need of it. There is gratifying evidence of its abundant fruitage among the armed forces of this and other countries. Favorable commendation has been received from officers and men who have experienced and witnessed the helpfulness of this activity in their behalf. It has supplied civilians with the precious literature which they could not otherwise obtain, and has given them comfort, assurance, and courage to carry on. As the opportunities increase for sending more literature to places already aided, and reaching other places where the need is equally great, the demands upon the fund will correspondingly increase. 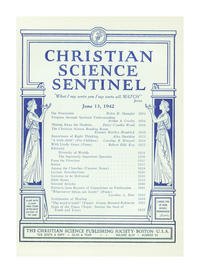