Christian Science has been a great blessing to my family...

Christian Science has been a great blessing to my family and me. When our son was somewhat over five years old, while he was playing with a sparkler, his clothing caught fire and he was severely burned. We at once called a practitioner for help, which was lovingly given. He was soon free from pain. A physician, who was called to bandage the burns, said that the child could not possibly live more than two weeks. However, I knew that "with God all things are possible." At the expiration of two weeks, contrary to the doctor's prediction, healing was being manifested and thin skin had begun to form. Step by step, improvement was made. Another verdict of the physician was that unless he was put in a brace his back would not be straight. Through the conscientious work of the loving practitioner this prognostication was annulled, and today he is a straight, healthy young man and leads a very active life.

We were very much criticized for relying on Christian Science for the healing, but we clung steadfastly to Truth, striving to realize the omnipresence of God, and the nothingness of all inharmonious conditions. Although the healing seemed slow, many lessons were learned and abundant proof of God's power was experienced. I am truly grateful to the practitioner who helped us through this trial.

Send a comment to the editors
NEXT IN THIS ISSUE
Testimony of Healing
The inspiration which accompanies a physical healing in... 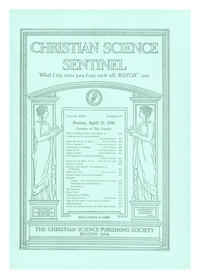