Starting in the Right Direction

Robert was ten years old and had attended a Christian Science Sunday School ever since he was two. He enjoyed going very much because he was learning a great deal there.

The Sunday school which he attended was very large, and it was necessary to have two sessions. When Robert had reached the age of ten, he had been transferred to the second session, which began immediately after the church service. Consequently, he could not go with his mother each Sunday as he had previously done, but was himself responsible for being there at the right time. 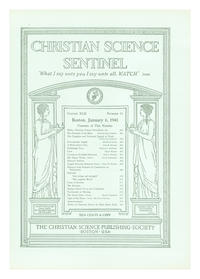