"Let us also walk in the Spirit"

When Paul wrote in his epistle to the Galatians, "If we live in the Spirit, let us also walk in the Spirit," he was at once logical and inspiring. He not only set forth the logic of consistency, but inspired those to whom he wrote to be consistent. Obviously, to claim that man lives, moves, and has his being in God, Spirit, and then persistently and habitually to act as though one believed man to be material, or to be partly material and partly spiritual, is, strictly speaking, inconsistent and illogical, and this is the situation in which students of Christian Science sometimes find themselves. At times, they appear to be much more concerned with being comfortable in matter than with knowing that there is no matter in which to be comfortable or uncomfortable. What they need to realize more perfectly and to prove more fully is that man is not and never was in a material body, or a material universe, but is now and always was in Mind, Spirit.

Mary Baker Eddy says in "Science and Health with Key to the Scriptures" (p. 468): "Spirit is the real and eternal; matter is the unreal and temporal. Spirit is God, and man is His image and likeness. Therefore man is not material; he is spiritual." That statement is revealed Truth. It is divine Mind declaring the truth about itself and its idea, man, through the inspired writings of its revelator in this age. Therefore, Christian Scientists should accept this statement just as they accept the inspired Word of the Scriptures, and know that because it is the Word of God it is demonstrable and infallible. 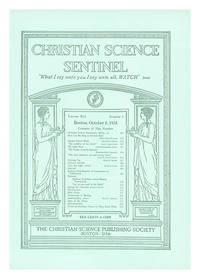