In a biographical sketch of a doctor, which appeared in...

Conrad Bernhard, Jr., Committee on Publication for the State of Maryland,—Baltimore

In a biographical sketch of a doctor, which appeared in a recent issue of the Afro-American, it was stated that in his practice he included faith-healing, Christian Science, spiritualism, and the ministration of drugs. While I entertain the highest regard for the late doctor's motives and good works, kindly give me space to inform your readers that the union of Christian Science with the other methods mentioned is not in accord with the teachings of its Discoverer and Founder, Mary Baker Eddy. In the Christian Science textbook, "Science and Health with Key to the Scriptures," on page 157, she writes, "Christian Science exterminates the drug, and rests on Mind alone as the curative Principle, acknowledging that the divine Mind has all power." Furthermore, Christian Science has no connection with spiritualism.

Send a comment to the editors
NEXT IN THIS ISSUE
Article
In your issue of June 22 a contributor made a facetious... 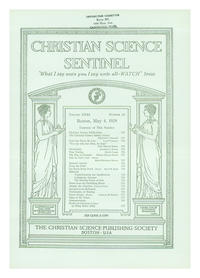