"Underneath are the everlasting arms"

Perhaps no person has ever more clearly proved the truth of the words, "Underneath are the everlasting arms," than did Moses, who gave them to us. For forty years Moses had been far from contact with men, especially with his own people, and it may seem natural that a certain diffidence should have crept into his thought. It must have taken more than ordinary courage for him to go before Pharaoh and demand the release of his people. Had he not known of the "everlasting arms," he would surely have succumbed when he came down from Mount Horeb and found idolatry rife among his people; and on many another occasion he was sustained through his understanding of God's nearness.

We read of David, Elijah, Jeremiah, and many others who had experiences that strengthened their faith in the upholding power of God. Christ Jesus based his entire experience on the fact that the Father is ever present; and Mrs. Eddy certainly could not have borne the scorn of her early statements of truth without reliance upon God. 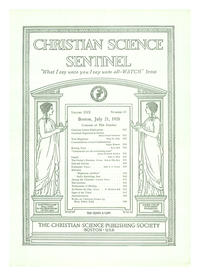