"He doeth the works"

It is a very common thing with some well-meaning persons who have seen the healing of disease accomplished through the demonstration of Christian Science, to speak in a way which shows their appreciation of the marvelous change which has taken place in the health of the person who has been treated. At the same time, they show their utter misunderstanding of the case by attributing the healing to suggestion. Some few, in order to seem consistent with this view of what is being done today "in the name of Jesus Christ of Nazareth," go so far as to allege that the works of our great Master were based upon suggestion, thus robbing these works of their divine character and placing them upon a purely material basis.

This is of course but a reiteration of the claim made against Jesus by the Pharisees, that "he casteth out devils through Beelzebub the chief of the devils," a claim which our Master immediately refuted. Throughout his ministry he continued to declare that the works which he did in demonstration of his teaching, were the result of his communion with God, "The Father that dwelleth in me, he doeth the works," was his explanation of the source of his power to heal. Perhaps no statement of this fact left by him is more emphatically expressive of his divine appointment, and of the divine source of the healing which he worked by the roadside, in the temple, and at the tomb, than is the statement recorded by St. John: "I can of mine own self do nothing: as I hear, I judge: and my judgment is just; because I seek not mine own will, but the will of the Father which hath sent me." 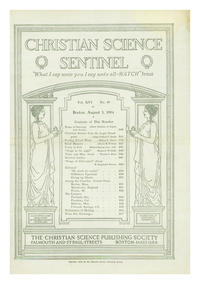