"I have called you friends"

It has been well said that spiritual growth is realized in keeping with the advance of our ideal, purified consciousness always bringing refinement of experience; that the higher the concept, the nobler the life. Mrs. Eddy said of Jesus, that "out of the amplitude of his pure affection, he defined Love" (Science and Health, p. 54), while St. John, who was closest to the Master, gives us an example of true comradeship in a unity of spiritual thought where unselfishness and purity afforded impulsion toward the highest expression of divine Love reflected in its idea.

We know that Jesus chose his followers from those who stood for the ideal, for the overcoming, those honestly and loyally working to define the true selfhood; and it was of these he said, "I have called you friends; for all things that I have heard of my Father I have made known unto you." Herein lies the key-note of friendship: You are my friends because I have given you of the highest that has been revealed to me; not that I have received of you, but that I have given to you. We are prone to measure values by the standard of utility, of profit received. But do we always take the full measure of utility? We have been truly profited only in so far as we have been led to define the true source of good and give it forth to our brother. "Every good gift and every perfect gift," we are told, "cometh down from the Father of lights." 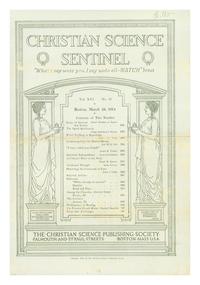