Without going into the religious phases of such a situation,...

Without going into the religious phases of such a situation, the fact is evident that there is such a thing as malicious animal magnetism, and that the world recognizes it under various names, and abhors it. We have two words in our language, that come from the Latin—malevolent and benevolent—which signify ill-wishing and well-wishing. And the malevolency that is in all of us to a greater or less extent is vicious, we admit. Yet through all the progress of the world we have failed to throw it off.

The followers of Mrs. Eddy have referred to malicious animal magnetism in times past merely by its initials, thus: "M. A. M." How can we rout M. A. M.? Or, to shorten it, how can we rout malice from the world? First, undoubtedly, by eradicating it from ourselves—from our own thoughts. It is hard to believe that men can exist without malice. Yet the greatest figures of history, including the Nazarene himself, have been men free from malice—in so far as humankind can be free from it. When we pass a man or woman on the street, and note their expression of feature, we can determine, generally, the character of their thoughts. Only a fleeting glance is needed. Women may smear their complexions with cosmetics, and yet not attain beauty. Instead of rubbing powders and creams on their faces, they ought to rout the malicious thoughts that produce wrinkles. The snarl is characteristic of the wolf—it is an ill-fitting attribute of humankind.

Send a comment to the editors
NEXT IN THIS ISSUE
Article
Our critic errs in his inference when he states that one... 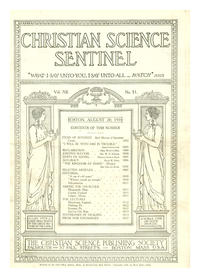