I desire to tell of some of the blessings that have come...

I desire to tell of some of the blessings that have come to me through Christian Science. In 1901 my lower limbs became affected as a result of spinal difficulty; I could not walk without the aid of crutches, could not even lift my feet; was afflicted with kidney and bladder disease, in fact was a wreck physically and mentally. So terrible seemed my affliction that I contemplated suicide. I was under medical treatment for two years, was in two different hospitals, tried electric treatment, took ice-cold baths for some months, but still I grew worse.

Hearing of Christian Science, I decided to give it a trial, and two months later I laid aside my crutches and walked with a cane. The doctors had informed me that the disease of the kidneys could never be cured. At that time I had no control over them, but in ninety days after beginning Christian Science treatment the action was perfectly normal. I gained rapidly in flesh, and now weigh one hundred and seventy-six pounds. While I still use a cane in walking, yet I have much to be thankful for, physically, morally, and spiritually. After the first treatment all desire for intoxicating drinks was destroyed. I am now a member of Second Church of Christ, Scientist, Dayton, O. Christian Science has brought to me a peace of mind I never experienced before. I have found these words of the prophet Isaiah true, "Thou wilt keep him in perfect peace, whose mind is stayed on thee: because he trusteth in thee."

Send a comment to the editors
NEXT IN THIS ISSUE
Testimony of Healing
I wish I could express in words my gratitude for Christian Science... 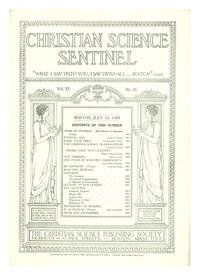