with contributions from George E. Perley

Music Hall was crowded by a cultured audience last night [October 16] to listen to Bicknell Young's lecture on Christian Science. However little or much appreciative hearers may have sympathized with the lecturer's convictions, they must have been inpressed with his scholarship, lucidity of exposition, argumentative power and high order of oratory. Without the magnetism which made a Beecher, or an In-gersoll, irresistible: without the story-telling or appeal to the gallery which popularizes many a clever but inferior speaker; without recourse to dramatic gestures, striking inflections, or attitudinizing, Bicknell Young made a modest and masterful presentation of his subject, culminating in tributes to Mrs. Eddy so full of force, richness, and beauty of language as to evoke the admiration of all present. Without passing any comment upon the teachings advanced, it is only just to say that as an eloquent, erudite, and intellectual effort, Mr. Young's lecture is surpassed but rarely on any platform.—The Troy Press. 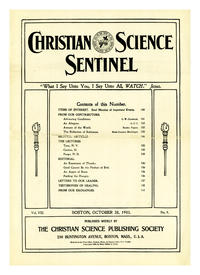