The Joy of Using Our Talents

Jim likes to run and jump and whoop and play games. But every Sunday morning he likes to go to the Christian Science Sunday School. There he sits in a circle of boys and girls his own age and listens while the teacher talks to them of God. She also tells them stories from the Bible and reads to them from Science and Health by Mrs. Eddy.

One of Jim's favorite Bible stories is the parable of the talents, which Jesus once told to his followers. The parable tells of a certain man who prepared to go away on a long journey and "who called his own servants, and delivered unto them his goods" (Matt. 25:14). To each servant he gave money, or "talents," as some of the money was called in those days. He gave five talents to one servant, two to another, and one to a third. He gave to each the amount he felt that servant was able to take care of. 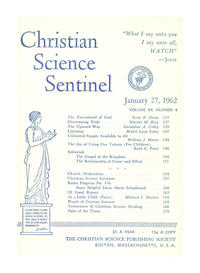