WHY JOIN THE CHURCH?

Any student of Christian Science whose life has been enriched by its teachings, whose body has been restored to health, whose relationships with others have been harmonized, and whose penury has given place to a conscious sense of abundance is naturally grateful for this scientific revelation which is proving to be a panacea for all his ills.

Eager to know more of the modus operandi by which this Science accomplishes these wonderful works, the student pours into his consciousness the truths which he finds in the textbook, "Science and Health with Key to the Scriptures," as well as in the other writings by Mary Baker Eddy, the Discoverer and Founder of this divine method of salvation. He finds also that many other means which afford aid to him in gaining a demonstrable understanding of this Christ Science are provided for by the Christian Science movement. 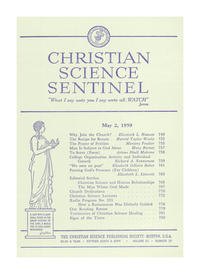