Christ Jesus was a man of peace. He never advocated the use of physical force as a means of settling conflicts, nor did he use the world's weapons in his warfare against error. In the garden of Gethsemane, immediately before his arrest by the emissaries of Caiaphas, he rebuked Peter for his resort to physical force as a means of defense. When the impulsive disciple drew a sword and cut off the ear of a servant of the high priest, Jesus healed the afflicted man instantaneously.

Although the Master rebuked Peter, he did not leave the matter unsupported, but went on to remind him of the spiritual defense upon which he himself could call, had he the wish to do so. "Thinkest thou," he said, "that I cannot now pray to my Father, and he shall presently give me more than twelve legions of angels?"On page 581 of the Christian Science textbook, "Science and Health with Key to the Scriptures" by Mary Baker Eddy, the word "angels" is defined as follows: "God's thoughts passing to man; spiritual intuitions, pure and perfect; the inspiration of goodness, purity, and immortality, counteracting all evil, sensuality, and mortality." It is clear from this definition that the legions of angels to which our Master referred must be the spiritual intutions, the pure thoughts from God, which abound in the consciousness of the spiritually-minded. 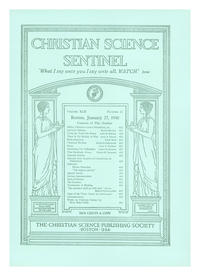