With a deep sense of gratitude to God, to Christ Jesus,...

With a deep sense of gratitude to God, to Christ Jesus, the Way-shower, and to Mary Baker Eddy, the Discoverer and Founder of Christian Science, I submit this testimony with the hope that it will encourage someone to seek God as the only Physician.

I had been a student of Christian Science for several years when I received a blow on the lower part of my spine that seemed to result in a great sense of nervousness. My husband, not being a Christian Scientist, called in a doctor, who made an examination and pronounced me of unsound mind, after which, contrary to my faith and desire, I was given drugs. In a short time, while in a very weakened state, I was sent to an institution for the insane. I was placed there with the understanding that no one except my husband could remove me from this place. I was left there for over two years. I soon became more quiet, could think more clearly, and was able to apply Christian Science with some success, although I was deprived of my books and regular study, as inmates of this institution are not allowed to read the Bible or any religious books because of a mistaken belief that many people have lost their reason over this subject. Under these circumstances I became discouraged and despondent, also quite weak physically, and felt injured and grieved to think that I was in such a place.

Send a comment to the editors
NEXT IN THIS ISSUE
Testimony of Healing
I have received so much good from testimonies since I... 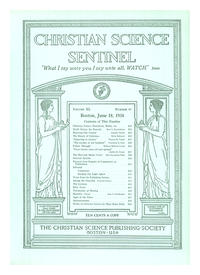