It is with joy that humanity learns that redemption from evil is a positive certainty. The rule that each individual must do his part in order to gain and enjoy this freedom progressively is reasonable, since nothing that is worth while is won without diligent effort. While the realization of complete freedom from belief in evil takes time, even a faint recognition of the perfect Science of Christianity which ensures this redemption brings hope and courage.

Many people today are finding comfort in the record of Job's victory over his difficulties. Step by step, as Job grasped the omnipotence and goodness of God, he proved practically the presence of divine Love, and redemption from his woes became for him a present fact. He regained his health, his possessions, and—more important than all else—he proved the value of a demonstrable understanding of God. He was able to exclaim with conviction, "I know that my redeemer liveth." Many today, by utilizing God's law, as revealed in Christian Science, are gaining conviction of God's supremacy, and are winning redemption. Can anything be more important, more valuable, than that here and now a growing measure of freedom from that which is unlike God, good, is assured? 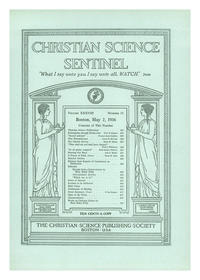