"Without form, and void" (Gen. 1:2)—The Hebrew words thus translated are usually found together and are practically synonymous, the first meaning "waste, emptiness, desolation, nothingness," and the second, "emptiness or chaos." The assonance of the original "thou wa bohu" is well suggested by Dr. Moffatt's rendering, "void and vacant." Smith suggests, "a desolate waste"; and C. F. Kent, "waste and void."

"That it should not be removed for ever" (Ps. 104:5)—A more literal rendering of the Hebrew verb would be, "be shaken or moved" (Brown, Driver, Briggs: Hebrew Lexicon, p. 577). Thus Moffatt translates, "never to be shaken;" Smith, "that it might not be moved forever and ever;" and Kent: "that it should not be removed forever." The early Genevan Version had: "so that it shall never move."

Send a comment to the editors
NEXT IN THIS ISSUE
Testimony of Healing
As a member of a Christian Science family of five, including... 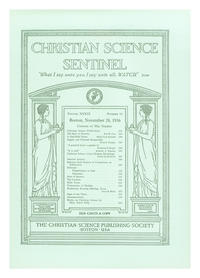