"Laid daily at the gate"

In the account given in Acts of the healing of "a certain man lame from his mother's womb," students of Christian Science find inspiration and guidance in the pursuit of their daily mental work.

The Scriptural account tells very little about the man who experienced this remarkable healing except that he "was carried" and was "laid daily at the gate of the temple which is called Beautiful, to ask alms of them that entered into the temple." It may readily be asked how it came about that this man, asking only that a coin be dropped into his hand, received so much more than he asked, even the strength to rise and enter into the temple, healed. 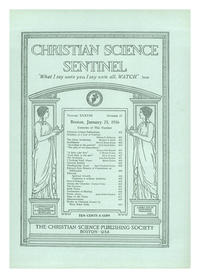