The part played by Paul in the early days of the Christian church was indeed a heroic one. He had set himself the task of bringing the gospel of Christ Jesus to the Gentiles, and never throughout the years, from his conversion on the road to Damascus until his earthly career ended in Rome, did he cease to teach and to demonstrate the truth which that gospel declared. And during that time, as his epistles show, he sought with prayerful earnestness to direct the steps of the converts whom his teaching had made, persistently admonishing them, persistently encouraging them, as they endeavored to follow in the footsteps of the humble Nazarene. Paul faltered not in his allegiance to the Master, and he longed to see all who had accepted Christianity as faithful as he himself was in their obedience. In his first letter to the Corinthian church he writes, "Therefore, my beloved brethren, be ye stedfast, unmoveable, always abounding in the work of the Lord, forasmuch as ye know that your labour is not in vain in the Lord."

Steadfastness should characterize the Christians of to-day, even as Paul said it should the first Christians. Steadfastness means obedience to the truth as revealed by Jesus. Obedience to the truth results in the overcoming of worldliness or materiality; and, as Christian Science shows, the overcoming of materiality, or material sense, means healing. Paul did not ask his brethren to be allegiant to the Master merely as a person; he besought them, rather, to be true to the revealed truth and to the laws of God which the Way-shower had shown governed God's creation. 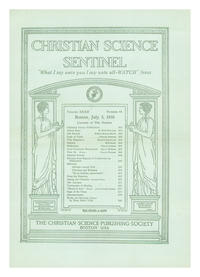