One Pot of Oil

THE fourth chapter of II Kings tells the story of an impoverished widow who appealed to the prophet Elisha to save her two sons from being sold as bondsmen. Elisha's response to the woman's plea was a question: "Tell me, what hast thou in the house?" To this the widow replied, "Thine handmaid hath not any thing in the house, save a pot of oil." One pot of oil, compared to the human need at that moment, might have seemed unworthy of consideration. Yet when the widow in humble obedience to the prophet's bidding borrowed many vessels and shut her door upon herself and her sons and poured out the oil, she found the supply adequate to satisfy their need. For there was "not a vessel more. And the oil stayed."

One definition of "oil" given by Mrs. Eddy on page 592 of "Science and Health with Key to the Scriptures" is "heavenly inspiration." In the light of this interpretation, the so-called miracle of the increase of oil resolves itself into the common experience of all Christian Scientists. The widow of the Bible narrative was already possessed of heavenly inspiration: she had more faith in God than in men; else she would not have turned to the man of God in this crisis. Elisha's spiritual sense discerned this fact. He was appealed to for help; yet he outwardly gave nothing. He merely bade the sufferer utilize the good that she already possessed. Had she expected to receive material assistance, the widow would inevitably have felt keen disappointment at the prophet's reply, for circumstances were not in any way altered. But in her appeal to a higher justice than the human law which sought to enslave her sons, through faith she turned away from the evidence before her eyes. She did not stop to question how the pouring out of the oil was going to solve her problem, but meekly withdrew within her house to prove the efficacy of divine Love.

Send a comment to the editors
NEXT IN THIS ISSUE
Article
The ridiculous Characterization of Christian Science carried... 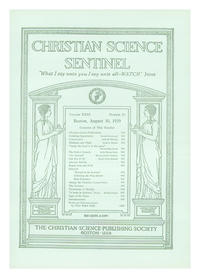