It is disappointing to observe in your recent issue that a...

Hugh Stuart Campbell, Committee on Publication for the State of Illinois,—Urbana

It is disappointing to observe in your recent issue that a speaker at a Methodist revival service condemned the doctrine of Christian Science to the extent that he was prompted to characterize it as a "masquerade" and a "big farce." In reaching such a false conclusion, it is obvious that our critic had delved into the writings of biased authors, and from such unreliable sources had gathered inaccurate material wherewith to impose upon his hearers and, as the press item implies, upon the intelligent readers of the Daily Courier. Had our critic formed his conclusions after reasonable study of the most reliable sources of information, the Christian Science textbook, "Science and Health with Key to the Scriptures," and the other writings by Mary Baker Eddy, the Discoverer and Founder of Christian Science, much that was said by him with reference to our religion would doubtless have remained unsaid. In these times, when Christian Science is quite generally recognized by thinking persons as a great religion of works, as a practical ministry of healing and redemption founded on the Christ-mission as taught and demonstrated by Jesus, it would be better if clergymen unacquainted with its precepts and practices would refrain from expressing biased opinions. Indeed, if Christian Science were a "delusion" as our critic is inclined to believe, its history would not reveal over half a century of progress and development, with churches and adherents in all parts of the civilized world. Prejudice and skepticism have not stayed, and cannot stay, the onward march of Truth. Christian Science is bringing to mankind the full measure of the Christianity preached by Christ Jesus when he said, "Go ye into all the world, and preach the gospel to every creature;" "Heal the sick."

Send a comment to the editors
NEXT IN THIS ISSUE
Article
Your contributor seems to fancy that if he repeats false... 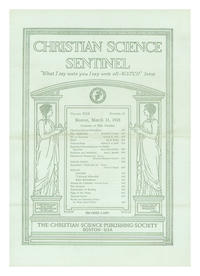