There is, perhaps, no way in which Christian Science has been more helpful to mankind in everyday problems than in teaching them to distinguish between thoughts and illusions. Real thoughts—and there are no others—belong to divine Mind; while illusions are false claims, suggestions of error, utterly lacking in the intelligence which is of God. One secret of right thinking and living is being able to analyze thought, to detect and shut out the illusions of evil claiming to have power, and to recognize and welcome real thoughts, the messages or angels which come from Principle, the loving Father.

The first need, then, is to learn to analyze thought. Sometimes we recognize the letters from our friends by their handwriting and sometimes by the stationery used; but if a friend whom we really know, one with whom we have lived and whose manner of thinking we understand, should send us a typewritten letter, on a different style of stationery than he had ever used before, even though he should fail to sign his name, we would recognize the letter as coming from this close friend, by the events that he describes and by his style of thought and expression. There would be no doubt as to the author. If other unidentified letters should come from those with whom we were not acquainted, although we might be unable to name the author, we would, at least, know that they were not from this intimate friend. 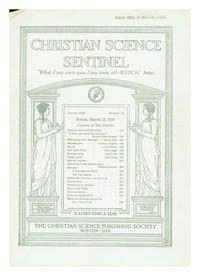