When even a small understanding of Christian Science is sufficient to bring a feeling of security to the human consciousness, it is strange that the student is inclined to underrate the prophylactic side of this teaching until one of the many incidents which go to make up the human sense of existence causes him to think what a deep debt of gratitude he owes for the revelation of the ever presence and protection of divine Truth. He then recognizes that it is this divine protection which has placed him to a great extent out of the reach of those little occurrences which in their varied appearances would tend to spoil the sense of harmony to which we are entitled as "heirs of God, and joint-heirs with Christ."

In Solomon's Song we read about "the little foxes, that spoil the vines." All Christian people have admitted that these foxes stood for various phases of error, and unless we guard our thought assiduouly they may gain a foothold in our consciousness under a variety of disguises, among which are procrastination, apathy, worry, doubt, and by no means least a subtle error which mortal mind calls "near enough." This "near enough" mental attitude has proved itself responsible for a great deal of trouble in the human experience, as it is the parent thought and forerunner of laziness, inexactitude, limitation, and the like, and is one of the chief delusions of this mortal mind. One of the first truths we learn in Christian Science is, "All is infinite Mind and its infinite manifestation" (Science and Health, p. 468); therefore it logically follows that there can in reality be no such condition as "near enough," because whatever is not in complete accord with the truth of being does not really exist. 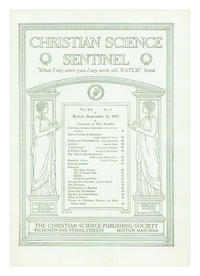