The fact is that the world is suffering grievously from...

The fact is that the world is suffering grievously from sickness and from pain, and is anxious beyond almost anything to rid itself of these. People who are in pain and people who are sick, know when they are relieved of that pain and of that sickness. It is because Christian Science has relieved hundreds of thousands of men and women, not only of pain and sickness but of sorrow and of sin and of despair, that it has spread itself over the habitable globe, and is enlarging its kingdom day by day. If this were not so, it would have foundered in failure years ago. It will take something more than the "wit and satire" of our medical critic to convince the world of anything contrary to this. It is, indeed, to be suspected that, while he is fulminating his critical thunderbolts and sharpening his wit, an ever-increasing number of the public for whom his criticism and his satire is intended will have experienced the healing of Christian Science, and will reply, in the words of the man born blind, "One thing I know, that, whereas I was blind, now I see."

Send a comment to the editors
NEXT IN THIS ISSUE
Article
The Christian Scientist believes the Bible teaching that... 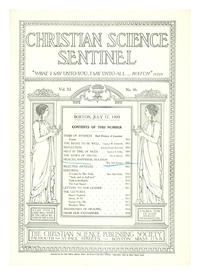