A DEMAND OF THIS AGE

This is an age in which, despite the multiplication of intricate inventions and bewildering social problems, there is a greater demand than ever before for simplicity of thought and its natural consequent, the simple statement of thought. The simplest statements are the most pregnant with meaning and are always the most convincing. Of all the things where simple and direct phraseology is most needed for a complete interchange of ideas, that which stands foremost is religion, yet nowhere is it possible to find a more complex literature than that which surrounds this subject. The Century Dictionary defines knowledge as "the state of being aware of truth." Now if this were the generally accepted fact about knowledge, that it is a "state of being aware of truth," a condition of consciousness, we might indeed say that the time had arrived which is predicted by Jeremiah, the days when "they shall teach no more every man his neighbor, and every man his brother, saying, Know the Lord: for they shall all know me, from the least of them unto the greatest of them, saith the Lord."

The world, however, puts a different construction upon knowledge, and we find it defined by Mrs. Eddy in Science and Health (p. 590) as "evidence obtained from the five corporeal senses; mortality; beliefs and opinions; human theories, doctrines, hypotheses; that which is not divine and is the origin of sin, sickness, and death; the opposite of spiritual Truth and understanding." This is a sufficient explanation of the strifes and debates which have marked the religious history of mankind for many centuries, but there are signs that a new era is dawning in which spiritual understanding will be recognized in all its grand simplicity, and individual integrity of thought no longer be marred by dogma or sectarian bitterness. 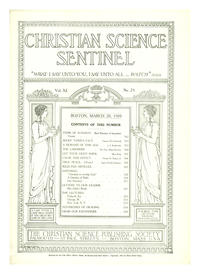