It is interesting to learn that quite a number of officers of the British army and navy have become Christian Scientists, and the genuineness of their interest in the movement is apparent from the fact that several of them are Readers in the churches. We are informed that in each of the three churches in London an army officer is Second Reader,—one is a colonel of the Royal Engineers, another a major of infantry, and the third a captain of cavalry. In Liverpool the Second Reader is a colonel of infantry, and in Dover the First Reader is a major of the Army Service Corps. In both Glasgow and Portsmouth the First Reader is a captain of the Royal Navy. The treasurer of one of the churches in London is a major of the Royal Artillery, and several officers of the Staff College are active Christian Scientists.

Send a comment to the editors
NEXT IN THIS ISSUE
Article
MRS. EDDY'S ARTICLE IN THE INDEPENDENT 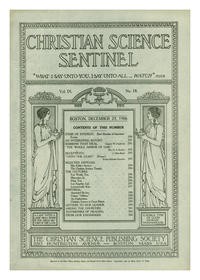