The Post Office Department. with the assistance of Government scientists, seeks to bar from the use of the mails the host of patent medicine concerns and exploiters of proprietary medicines and nostrums which chemical analyses show are incapable of performing the wonderful cures claimed for them. Although the work is still in the initiatory stage, sufficient evidence has already been discovered, it is said, to warrant the conclusion that many of the widely advertised patent remedies are frauds.

The United States cruiser Tacoma is about to start from Honolulu for San Francisco by a roundabout route, going first to a location between there and Panama in search of an unknown island, which has been reported many times. It is believed that the ship of war Levant, which disappeared after leaving Hilo in August, 1860, was wrecked on this island. It is thought possible that there may still be some of her survivors on the island. 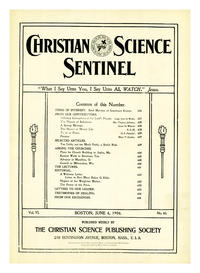