WHAT INFLUENCE DO WE ACCEPT?

Our acts and thoughts are often unknowingly influenced by the so-called general belief. We listen to the radio, read the daily newspapers, talk to others, and before we realize it we may have absorbed some of the views presented, without distinguishing between that which is desirable and that which is not.

Christian Science teaches us to protect ourselves from erroneous world beliefs by mentally refusing to be influenced by them, knowing that God is the only Mind and that only right thoughts originate in divine Mind. These thoughts reflect the positive and good, for God never made the negative and evil. Entertaining God's thoughts, we dwell "in the secret place of the most High" (Ps. 91:1) where erroneous and fearful thoughts cannot enter. It is sometimes difficult for us to hold to right thoughts and views when others around us think differently. For those who do not reject them, world beliefs are a mesmeric influence. However, these erroneous influences are actually powerless. 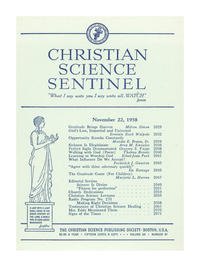