The beautiful healing of three...

The beautiful healing of three children brought up in Christian Science has shown me that God is indeed the source of being and that our completeness in Him is intact. The three children to whom I have reference were those of my nephew, a young man whom we had raised in our home. His wife passed on as the result of an automobile accident, and the children, who were seriously injured, were taken to a hospital.

When their father was called to the hospital, the authorities refused to release the children, but the following morning the two younger children were released. The older boy, who was twelve, had not yet regained consciousness.

Send a comment to the editors
NEXT IN THIS ISSUE
Testimony of Healing
In I John we read (4:8), "God... 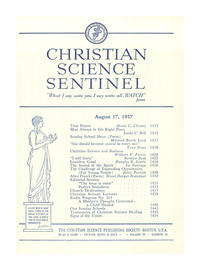