GOD AND MAN ARE FOREVER INSEPARABLE

As the writer observed a sunbeam upon the carpet, she thought: "How impossible it is to destroy that sunbeam, to remove or separate it from the sun, its source. Nothing can have any effect on its nature except the sun itself, which, by altering its own nature, would then change the nature of its beams."

Then the thought came that, like the sunbeam, man, the manifestation of divine Mind, an individual idea, cannot be destroyed, removed, or separated from his divine source, Mind. An idea derives all its life and power from Mind; therefore it is utterly indestructible. The idea cannot change unless Mind changes. Mind determines the quality of the idea. 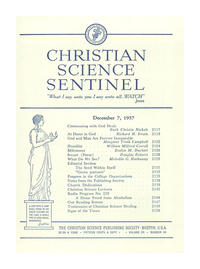