Mary Magdalene believed that Christ Jesus was dead. Standing by the sepulcher in which he had been buried, she mourned for the one who had cast seven devils out of her. "Woman, why weepest thou? whom seekest thou?" she heard someone say to her (John 20: 15). Blinded by her grief, she did not recognize that the one who had just spoken to her was Jesus. She thought that he was the gardener. Then Jesus called her by her name. Awakened by the power of divine Love, which the Master expressed so completely, she saw him and joyfully realized that he was not dead.

One lesson which this incident teaches is that grief is the product of the false assumption that death is real. Remove this assumption, and grief disappears. In Mary's case, her grief had not been caused by Jesus' death, since he was alive, but by the belief that he was dead. As soon as she realized that Jesus was alive, she was freed from grief. 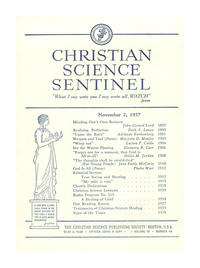