The Annual Meeting of The Mother Church is a time for rejoicing in good unfolded and progress made during the past year. Reports of the official activities of our movement are read on this occasion, in accordance with Section 1, Article XIII, of the Manual of The Mother Church by Mary Baker Eddy, which provides also for "general reports from the Field." These latter are compiled from the many letters received from branch Churches of Christ, Scientist, and Christian Science Societies, telling of forward steps taken and encouraging evidence of the growth of Christian Science in their communities. Such reports are welcomed, and as many are read as the time allotted to this part of the program permits. These reports may be sent in by branch churches and societies individually, or by churches and societies in the same locality, jointly.

In order that ample time may be given to the consideration of the reports sent in from the churches and societies for use at the Annual Meeting to be held on June 4 this year, it will be helpful to have them in the office of The Christian Science Board of Directors by April 15, and as much earlier as possible. 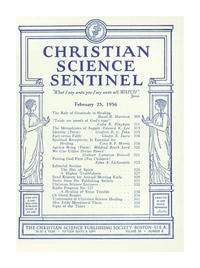