[Following is the text of the program of the above title released for broadcast the week end of July 23–25 in the radio series, "How Christian Science Heals," heard internationally over about 600 stations. This is one of the weekly programs produced by the Christian Science Committee on Publication, 107 Falmouth Street, Boston 15, Massachusetts.]

On this program Robert F. Williams of Houston, Texas, told of his own experience, as follows:

Following some three years of active service with the Army in World War II, I returned to civilian duty with a large corporation that had been my employer for more than twenty years. They rewarded me with a splendid promotion and the following year elevated me to the rank of superintendent, a position I had hoped for since first entering their service. I was greatly elated over my good fortune. My future appeared very bright indeed. 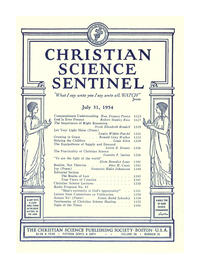