During a Christian Science lecture...

During a Christian Science lecture twenty-three years ago, the first we had ever attended, my daughter was healed of whooping cough. Previous arrangements had been made to take the child to a clinic for examination and treatment. This we did the second day following the lecture. After a thorough examination the physician said: "The symptoms you speak of indicate whooping cough, but the child isn't coughing now. I find her lungs in perfect condition." The serum treatment was withheld; prescriptions given were never filled. We realized that the healing was complete.

Three copies of the textbook, "Science and Health with Key to the Scriptures" by Mary Baker Eddy, were purchased that week, one for us and two for others who had witnessed the healing. While reading the textbook, I was healed of chronic constipation and have had no return of this condition.

Send a comment to the editors
NEXT IN THIS ISSUE
Testimony of Healing
I am grateful that through Christian Science... 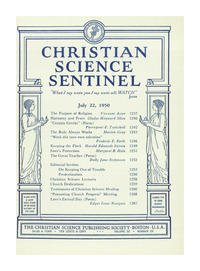