During the year, thirty-eight references to Christian Science were made in various newspapers and periodicals. Twelve letters of correction were written, and ten of these were printed.

Nine newspapers carried translated articles from The Christian Science Monitor, and one paper reproduced two cartoons from the Monitor. In each case credit was given to the source.

Send a comment to the editors
NEXT IN THIS ISSUE
Editorial
Healing, Divinely Natural 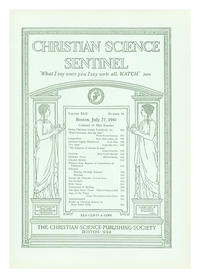