Danger may be regarded as liability to harm; and this condition is apparently greatly increased by war, which removes so many material safeguards, and licenses nations to indulge in the destruction of life and property to the utmost of their ability. During the war of 1914-1918, a naval officer, who was a Christian Scientist, accepted the prevalent thought to the extent that he considered himself to be in greater danger when at sea, being more liable to attack by enemy forces there when in harbor.

This mental attitude was, however, rudely shaken when, while in harbor one wintry night, he found himself precipitated into the water, and apparently in peril. Through the application of Christian Science he was saved from both fear and death. This experience caused him to ask himself what constituted danger or safety, his previously accepted convictions on the subject having apparently been proved at fault. 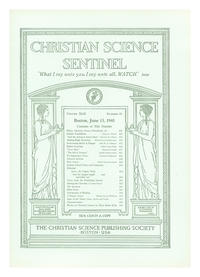