Sixteen years ago I was in the midst of a very unhappy...

Sixteen years ago I was in the midst of a very unhappy mental and physical depression. Discouraged at being refused an insurance policy, I resigned my position and accepted the verdict that I was suffering from an incurable heart ailment. It was at this point that I picked up a copy of the Christian Science Sentinel in a friend's car and read one of the articles. Immediately interested, I read the next, and the next, for here at least were statements that I wanted to believe. And I received my first healing—freedom from prejudice towards Christian Science.

I obtained a copy of the Christian Science textbook, "Science and Health with Key to the Scriptures" by Mary Baker Eddy, and began to read and ponder. What I could not understand I passed over; to what seemed reasonable I held fast. I also began to study the Bible. Soon I was able to demonstrate in a small way some of the truths I learned. Then an occasion arose which caused me to set my face definitely towards Truth. This was the removal of a splinter from the pupil of my eye without material aid, after an operation had been advised by a doctor.

Send a comment to the editors
NEXT IN THIS ISSUE
Testimony of Healing
In Science and Health Mrs. Eddy says (p. 318): "The... 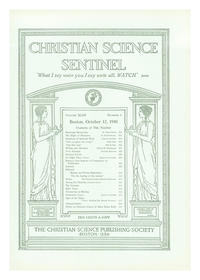