In the Preface to "Science and Health with Key to the Scriptures" (p. vii), Mary Baker Eddy, the divinely directed Discoverer and Founder of Christian Science, sounds the keynote of Christian Science theology and points the path of Christianly scientific practice and proof, in this short sentence: "To those leaning on the sustaining infinite, to-day is big with blessings." Many weary and discouraged seekers for health and peace have been strengthened and heartened by this assuring and directing statement. Others who, because of a false concept of God, had been regarding disease and discord as part of the divine plan and so had been resigned to them, have been roused by this proclamation and promise to see that they had not been depending upon divine power as they had imagined they had, for their days, instead of being "big with blessings," had been filled with fear and many ills.

More than all other men did Christ Jesus rely upon God for everything. He knew that the infinite, impartially loving Parent is continually blessing His children; therefore, the Master looked to the infinite divine Mind for intelligence and wisdom, even as he depended upon omnipotent Love for both providence and protection. And so each day was "big with blessings" for Christ Jesus, yes, even the day when he permitted materially-minded men to hang his human body on a cross. For, as a result of his complete reliance upon Spirit as Life, the Master disproved the material beliefs that life is dependent upon physicality, and that hatred and animality are dominant forces with mankind. 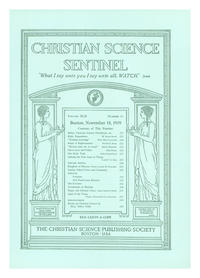