The Christ, Truth, which Christian Science has revealed to the world, is today healing the sick, freeing mankind from the bondage of fear and sin, and bringing to humanity the abundant life promised by our Master. Thus the most important question facing all humanity is: "How may I acquire this spirituality, the faith which is 'the substance of things hoped for'? How may I touch the hem of the garment of Christliness?"

There is no difference of opinion as to the answer among those who have gained some measure of this desideratum, for every honest student of this Science recognizes that the spiritual understanding of God and His creation has come to him through the prayerful and diligent study of the Bible, the Christian Science textbook, "Science and Health with Key to the Scriptures," and the other writings given us by our beloved Leader, Mary Baker Eddy. These writings present not only the truth about God, man, and the universe, but also the rules for its application in the healing of sickness and sin. Ignorance of God, of that which is good and beneficial, is the breaker of the Ten Commandments. Thus sin is healed only by a true knowledge of God. Only in like manner can sickness be eradicated, for it also is the result of a misconception of what is real. Hence the need of the correct understanding of Deity, which is gained through study of Christian Science. 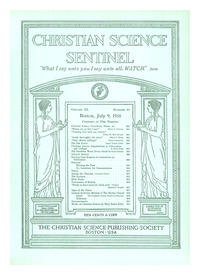