My little daughter, four years old, was suffering with...

My little daughter, four years old, was suffering with mastoiditis. I had called in a physician, who treated her for several weeks, at the end of which time he said she would have to be operated on immediately. It was then that I called for a Christian Science practitioner, who was very kind to me. That was a happy day for me. At once I became very much interested and began reading the Christian Science textbook, "Science and Health with Key to the Scriptures" by Mary Baker Eddy. My child was completely healed in a few days.

I visited the Science Reading Rooms and borrowed "The Life of Mary Baker Eddy" by Sibyl Wilbur. Christian Science opened a new world to me. The more I read of Science the better I understood God. I had been reared by religious parents and had been a member of the Methodist church since I was eighteen years old. Through earnest study of Christian Science my own health improved. I was also healed of what physicians called high blood pressure and leakage of the heart.

Send a comment to the editors
NEXT IN THIS ISSUE
Testimony of Healing
All my life I have loved the Bible, and have tried to... 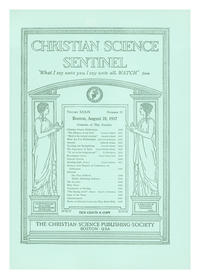